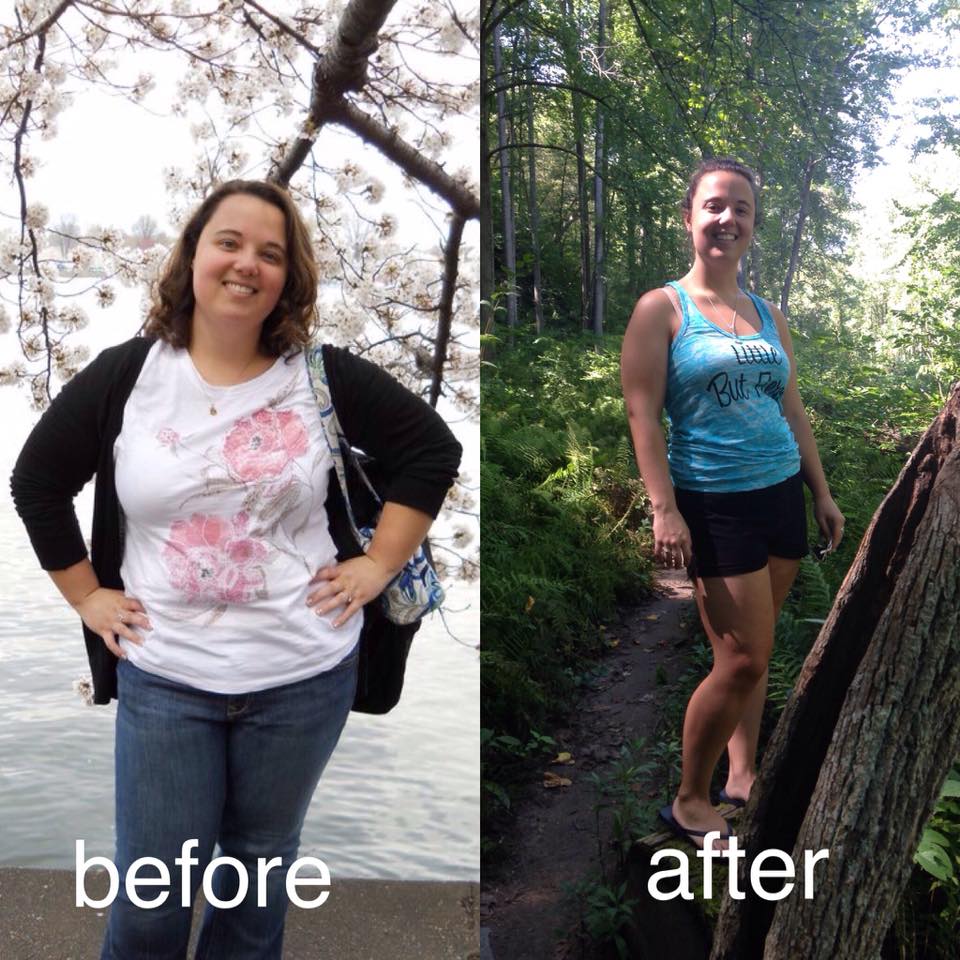 I have been on a diet my entire life – my mom loves telling me how I used to steal her Jenny Craig burgers as a kid. I tried at least four varieties of Weight Watchers through middle and high school, intermingled with personal starvation attempts (lots of  fasting and juice cleanses) in college.

Guess what? None of them worked. At my largest I was 200 pounds and size 14. I hated my body on a quiet level because I simply chose not to think about it. I didn’t look in mirrors, I didn’t dress up and I left my pants unbuttoned while sitting at work…so maybe I was a little bigger than size 14.

I didn’t even realize my lowest moment – eating a cookie dough blizzard in bed while watching Biggest Loser and ignoring my own self-esteem issues – was my lowest moment until years later, when I was strong enough to acknowledge the embarrassing mental image.

I just figured there was something wrong with me. Why wouldn’t my body listen to these diet plans? Why couldn’t I lose weight? I gave up on feeling good about myself. I gave up on trying to improve.

But here’s the question I should have been asking: Why aren’t I listening to my body? I was so busy trying to follow the diet trends the elusive “they” said would work, I never thought about what would work for me.

It took me three years after college, living alone for the first time two hours away from everyone I knew with nowhere to turn but to myself, before I asked this question. It was then I figured it out:  my body is not typical, so the typical diet was not going to work.

Turns out I have a thyroid condition (ok, I always knew this, but lacked awareness about what it meant besides taking medicine every morning), which means my body doesn’t process carbs like normal. Instead of using carbs as energy my body stores it as fat (tell me how that’s fair!). And in case you are wondering, all those diet meals and bars are packed full with carbs.

So in a super twisted turn of fate, those diet plans were actually making me fatter. So I turned to the power of Google and My Fitness Pal to design a lifestyle plan – because whatever I was about to attempt would have to be a permanent health change – that works for me.

I knew I couldn’t go off carbs, because that’s something I can’t maintain. Sometimes I’m going to want a cracker….or five damnit. So I calculated my regular net carb intake – 300 or more a day – and started by cutting it in half. I made a list of all the foods I liked that were low in carb – cheese (heck yes) almond milk (loving it) and every darn piece of protein I could possibly crave.

I took to Pinterest to find recipes that involved these delectable ingredients and some new ones (lesson learned – I hate cauliflower). Here I was feeling all empowered, joined a group fitness gym and was cooking up a storm.

But I was starving – that 1,200 calories My Fitness Pal put me on to lose two pounds a week was killing me, literally, as in starvation mode (And yes, I was eating the calories back that I worked off). When you enter starvation mode your metabolism slows down and your body hoards fat, so essentially this wasn’t working for me.

So I went online to five different health website and calculated how many calories I could eat to lose a pound a week, then averaged them together at 1,500.

It doesn’t sound like a lot, but that little tweak made all the difference. Finding what worked for me made all the difference. Now I only had to deal with the exhaustion of my body switching over to protein as energy instead of carbs. Thankfully, I only had about two weeks during which I pretty much napped when I wasn’t at work or the gym or attempting a social life.

For two weeks I considered what worked for me, and that was sticking to my new lifestyle and napping. I could feel a different power behind my workouts, ones that weren’t fueled by carbs, but by me. And then I did a pushup. That was my kickstarter.

I went home after a month, and my mom and brother literally stared at me when I walked in the door. I’m talking mouths open, almost tripping over the porch steps. It had taken me 23 years, but I finally figured out what worked for me.

Since then, I’ve lost 50 pounds over two years and have maintained for two years. And you better believe my 150 pound body includes some sexy muscle thanks to at-home Jillian Michael tapes.

I don’t mind checking myself out in the mirror now, I enjoy getting dressed up for a night out and sometimes I even wink at guys at the bar. I feel good about myself, and that works for me.

adventure, changes, physical, self, you're fabulous!

One thought on “My Ridiculously Honest Weight Loss Diary”