Today we’ll be vacationing somewhere inconceivable. Think Wonka Chocolate Factory, but even better. What you eat here just might make you float on air, minus the whole burping to escape spinning blades in an elevator shaft thing. The cookie, a gift sculpted by the Gods themselves, arrived in America thanks to the Dutch. But before we dig in, let’s conduct a bit of a background check on this delicious baked good (of course, thanks to Wikipedia):

Cookies appear to have their origins in 7th century AD Persia, shortly after the use of sugar became relatively common in the region. They spread to Europe through the Muslim conquest of Spain. By the 14th century, they were common in all levels of society throughout Europe, from royal cuisine to street vendors.

With global travel becoming widespread at the time, cookies made a natural travel companion, a modernized equivalent of the travel cakes used throughout history. One of the most popular early cookies, which traveled especially well and became known on every continent by similar names, was the jumble, a relatively hard cookie made largely from nuts, sweetener and water.

Cookies came to America through the Dutch in New Amsterdam in the late 1620s. The Dutch word “koekje” was Anglicized to “cookie” or cooky. The earliest reference to cookies in America is in 1703, when “The Dutch in New York provided…in 1703…at a funeral 800 cookies…'”

The common modern cookie, given its style by the creaming of butter and sugar, was not common until the 18th century.

These are a few of my favorite things: sugar, chocolate and anything from Levain Bakery. Levain is a tiny, magical bakery that I was #blessed enough to live next to while growing up in NYC. It is home to the best baked goods in New York City  (if you disagree that’s fine – more for me). The chocolate chip banana bread is divine. The chocolate-stuffed rolls will make you scream HALLELUJAH! But it’s the amazing cookies, the size of your head, that could make Cookie Monster belt out Jason Derulo’s “Talk Dirty” at Mr. Hooper’s karaoke party. They are just that good.

At $4 a pop, these cookies are dense, crispy on the outside, gooey on the inside and almost too glutinous to finish in one sitting. Almost. They have four different kinds: double chocolate chip, peanut butter chocolate chip, chocolate chip walnut and oatmeal raisin (because there’s always that one person in the group).

If you want to feel healthy, this is the cookie to get. Walnuts are a superfood, which basically makes this cookie a super-superfood. The first thing you’ll notice when it’s handed to you is the sheer weight of it. Is it a rock? Is it a weapon? A superfood and a method for self-defense? Consider buying a few extra to carry with you at all times in case you get mugged. 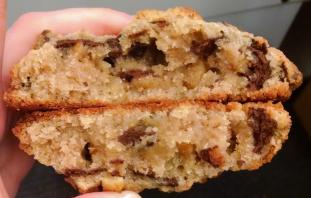 Sink your teeth into its crispy cookie crust and you’ll soon discover the gold inside – the almost uncooked cookie dough innards that melt in your mouth (and in your hands). As you reach that last bite, you’ll start to feel conflicted- so happy that your new treasure is safely tucked away inside your belly, but so sad that it’s over. Finishing this cookie in one sitting is a feat so impressive, they should hang your photo on the wall and commission a parade in your honor. To quote the great Ben Gibbard, “And now that’s it’s gone, it’s like it wasn’t there at all.”

To get some extra mileage out of your cookie “stay,” here’s a recipe to get you by (or if you prefer, just order a dozen from Levain’s website).

This recipe works best if:

-You undercook the cookie. It keeps baking as it cools, so be sure to take it out of the oven early.

-Use large chocolate chips. They create those beautiful melted chocolate puddles inside your cookie!

adventure, bank, travel, worth the cash