Cyberstalking is Real, and it’s Not Okay

As a woman living in New York City, my movements through my day-to-day life tend to be catalyzed by a combination of skepticism, trepidation, annoyance and amusement. Thanks to feminist activists and new-age media; my discomfort with catcalling; intolerance for sexual-harassment opportunists on packed subways; and the general ickiness associated with the implicit sex-for-dinner contract are all coming to the forefront as legitimate, institutionalized problems.

It’s no secret that these conventions of what it means to exist as a female in the United States work as a system of oppression, oftentimes making us wonder if we’re crazy, or if we’re at fault for our victimhood.

So, I did what any newly-single New Yorker does: I joined a dating website and curated a lifestyle resembling a poor girl’s “Sex and the City.”  I went on a lot of dates, had a moderate amount of meaningless sex and usually ate oatmeal for dinner. It wasn’t a healthy few months, but they were distinctly mine.

During my epoch of “yes,” I met a seemingly nice guy, “Dave,” at Pianos, a very Lower-East-Side bar with a dance floor upstairs and herds of drunk 20-somethings obliviously leaning against each other because of space constraints and an abundance of booze. We danced a little, chatted a smidge, ultimately exchanged numbers and made a sushi date.

The date was painful. I had almost bailed about five times, but he was uncomfortably persistent, so I gave in, put on a dress and showed up. We had nothing in common, but I let him walk me home, barely permitted a truly awful kiss and then rushed into my apartment.

Dave apparently had a good time because he texted me the next day to ask about meeting up again. In true millennial fashion, I ignored it. Within the next hour or so he texted me half a dozen times, so I figured it was time to put on my big-girl pants and kindly tell him I wasn’t interested. Then things got scary.

He obsessively continued texting me, bargaining with me and begging to go on another date. He told me I was a stuck-up bitch with an ugly dog in one text, and in the next he would desperately apologize and tell me he wanted to treat me like a princess. I went to bed wondering if he was lurking outside my window, if he would try to get into my apartment or maybe even come by with a weapon.

I had never felt so threatened by simple text messages. After ignoring his manic texts for a few hours, he began calling me repeatedly, sometimes from unknown numbers, leaving voicemails imploring me to call him back so he could help me get a job at “Time” magazine. 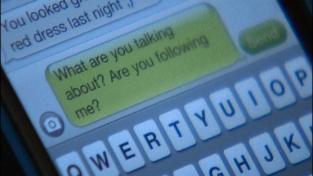 “We have so much in common,” he pleaded. “I promise I won’t show up at your place or do anything crazy. I just really think we should go out again.” In his unstable state, and I’m assuming out of pure desperation, he then admitted to me he had lied about his name. A chill overtook me as I considered why he would ever fabricate something so seemingly insignificant.

On the third day of this nightmare I decided I was done being made a victim and I was going to the police to file a report.

When I got to the precinct, I calmly told the police officer my story, how I feared for my safety. My heart sunk as the officer looked at me skeptically and implied I was overreacting: “This doesn’t really constitute stalking; come back if he continues.” I left feeling defeated, and questioned whether I was blowing this all out of proportion.

Then came the straw that broke the proverbial camel’s back: he tried to send me flowers. Never in my life did I think a commonly sweet gesture would freeze me with such terror. I received a call from the delivery service, as Dave had given them the wrong address (thankfully) and they needed to know where to send the bouquet. I outright refused the delivery. Dave texted me like clockwork, “Did you like the flowers?” Throughout this nightmare I had fluctuated between ignoring Dave, and telling him to leave me the fuck alone. Enough was enough.

I returned to the police station hoping for a more urgent reaction, but was sorely disappointed. A different policeman told me I should feel flattered, that Dave was only trying to woo me and they couldn’t file a complaint for that. Stereotypical romantic comedy tropes were making it impossible for people to take the threat of my stalker seriously. I wanted to cry. I wanted to scream at the officer. It shouldn’t have made a difference, but what if this was his daughter? Sister? Mother?

I finally convinced the policeman to call Dave and tell him to leave me alone, but I still helplessly dealt with Dave’s cyber-harassment for the rest of the month until he must have finally tired out.

Dave has probably since forgotten about the poor girl he technologically preyed upon. I, however, will never forget the feeling of fear or the heartbreaking lesson of systemic patriarchy.

Cyberstalking is a legitimate problem; it is not flattery and it is definitely not acceptable. This type of harassment doesn’t just happen through text messages – many women who simply share their opinion on the internet are constantly subjected to misogynistic, horrible insults. If you are dealing with any form of cyber harassment or stalking, please adhere to the advice found at 1800victims.org:

-If the unwanted contact continues, it is important that you do not engage with the stalker in any way or respond to any of his/her attempts to contact you.

– Let your friends, family and employer know that you are being stalked.

– Call the police and make a report. You may also get a restraining order against the person.

– Victims are the most important source of information to an investigation.  A victim should document every contact and stalking-related behavior in order to help authorities build a case against the stalker.

– Keep all evidence and turn it over to police.

You can find out more about what constitutes cyberstalking here.