Bringing Gender Into It

So what, exactly, are pre-existing conditions? The list is long – more than 50 conditions, from acne to thyroid disorders – but apparently things that are part of everyday life for many women are included, like having a heavy period, postpartum depression, giving birth via c-section and pregnancy.

Take a moment. Let that sink in. House Republicans want to punish women for health conditions that are natural parts of being a woman.

The bill is now headed to the U.S. Senate, where, thankfully, they hate the bill. They know this bill is wildly unpopular, with about a 17 percent approval rating, and that there are many pieces they’ll need Democrats for (particularly the tax reform bits, designed to give major cuts to the wealthy), and need to compromise on (a few Republicans in the Senate are more moderate than the far-right “Freedom Caucus” of the House, which had a huge hand in this bill).

So, Senate Republicans are drafting their own health care bill. And who is in charge of creating that bill?

Looks like @SenateGOP may exclude women from their #Trumpcare rewrite. What could possibly go wrong? #WomenAreWatching pic.twitter.com/R8lTiRC7HM 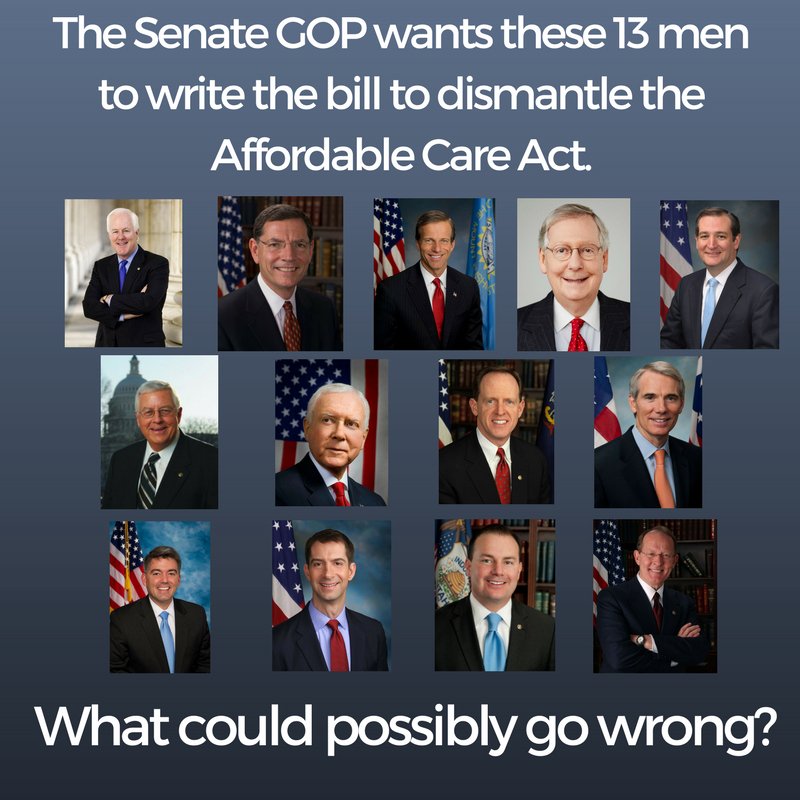 THIRTEEN. REPUBLICAN. MEN. All of whom are anti-abortion rights. It’s not like women need health care or anything, right?

Naturally, Republicans were asked about the decision to put 13 men in charge of a bill that will impact millions of women across the country. Here’s how an aide responded:

“To reduce this to gender, race or geography misses the more important point of the diverse segments of the conference the group represents on policy — from members who support Medicaid expansion, to those opposed to it, to those who have called for long term full repeal.”

When the U.S. House of Representatives passed a bill that essentially sees women’s existence, daily experiences and reproductive healthcare as “other” and out of the norm, GENDER, GEOGRAPHY AND RACE ARE ABSOLUTELY RELEVANT.

One in three black and brown women experience postpartum depression. Cuts to Planned Parenthood disproportionately impact low-income women and women of color, particularly women in rural areas who have to drive farther to get access to basic reproductive health care when clinics shut down.

Women are watching, Senate Republicans. And we’re pissed as hell.

Want to share your rage with your Congressman? Dial the U.S. Congressional switchboard and give them a piece of your mind.