Hard truth: I never thought of voting as a big deal – with so many potential flaws in the process I was personally convinced my vote wouldn’t count for anything. When my college roommate found out I wasn’t registered to vote, she forcibly ordered my absentee paperwork and sat with me while I filled it out. I vaguely remember voting for Obama in his first election, but can’t even remember if I voted his second term.

So, I was quite surprised at myself yesterday morning when, after spending the night before researching my local representatives, I was one of the first voters in line. I brought a book in case of a long wait, which there was; I was prepared for hecklers, which there wasn’t; and I was ready to cast my vote for Hillary Clinton, the first female presidential candidate in history. 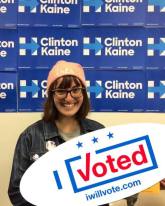 Here’s what I know about Hillary Clinton – She believes that women have the right to govern their own bodies; undocumented immigrants who come to America (as literally all of our ancestors did) can become US citizens; the government has no right to collect phone and email data on US citizens; global change is happening (80 degrees in November people); love is love and a person can marry whomever they want; and public colleges and universities should be free to attend.

Donald Trump believes none of these things.

He wants to “Make America Great Again” by encouraging law enforcement to use racial profiling; punishing women who make the personal decision to get an abortion; building a wall to keep undocumented immigrants out while the government sends raids to keep them in check; cutting off funding to law enforcement agencies located in “Sanctuary Cities;” and making torture a legal interrogation

Who is going to thrive in his world? The white men who yearn for a time when women and people of different races were treated as the lesser in comparison.

“But the emails, the emails! Hillary can’t be trusted!” I still see Republicans pushing this point all over the internet. But after two, count them two, investigations, one as recent as last week, the

FBI declared there is no evidence supporting the mishandling of classified information on Clinton’s part.

To those of you who now question the FBI, I congratulate you on making the move from Republican to conspiracy theorist. All the while your candidate is entering the White House with 75 pending lawsuits against his person or his business involving sexual harassment, real estate fraud, defamation, discrimination and unpaid taxes. Yes, the next president isn’t paying all his taxes.

The choice was, and still is, clear to me. I bubbled in my candidate and smiled as the scanner confirmed my vote had been accepted. Trump’s victory will not stop us from working for change, from fighting for equal rights across all sexes and races. #ImStillWithHer

Share this article and include #ImStillWithHer if you are committed to the same goals for change as Moxie.