When Ali (last name omitted for safety reasons) started college at Johns Hopkins University, all that was on her mind was if she’d get along with her roommate and what clubs she would join. But among the back-to-school notebooks and pens on her shopping list, her father had added pepper spray, written in red pen, to the list. He was thinking about what many forget – college-age women are three times more likely to experience sexual violence.

In the weeks that followed, Ali met new friends and even joined a sorority to expand her social life, but she never once thought a fun night out would take a turn and make a huge impact on her life.

“I didn’t think someone who I considered a friend would try and take advantage of me,” said Ali, who was raped at an on-campus party. “At the time I knew what had happened was wrong, but I was out and drinking, so I almost felt like it was my fault, and that I could have prevented it. I didn’t want to tell anyone. I didn’t want to bring any attention to myself.”

After months of living in fear, similar to the  80 percent of women who do not report sexual assault cases, Ali decided to come forward and tell campus officials about her attack.

“By the time I decided to say something it was too late to do any exams on me to get proof, which was a regret of mine,” Ali said, now a junior at Johns Hopkins. “I knew they weren’t going to be able to do much, but to my surprise the school took it really seriously and helped me through the process by setting me up with a therapist. They made me feel like my problem was important and it wasn’t my fault, which is what I was concerned about from the start.”

In recent months, sexual assault has become a hot button issue as a former Stanford University student was convicted of sexually assaulting an unconscious woman, but was only sentenced to six months in prison. If the minimal sentence didn’t cause enough controversy, the fact he only served three months in prison did. People around the country are starting to realize sexual assault on college campuses is a serious problem in today’s society.

“I would have to intervene if I saw a sexual assault happening,” said Desmond Boyle, a Towson University student and fraternity member. “The only thing going through my mind would be how to stop it and not let it happen. My fraternity donates to RAINN (Rape Abuse & Incest National Network) so we try to do what we can to stop this from happening.”

But even with a wider knowledge of the problem, and improvements in campus security, young women are still questioning their safety.

“I don’t ever walk alone by myself at night and someone always knows where I am if I’m out late,” said college junior Alicia Reynolds. “[My school] has a shuttle system I use a lot to avoid walking at night, and if I do have to walk I try to keep one of the blue emergency light stations in view.” 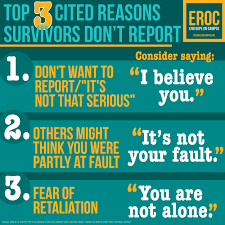 Though Reynolds uses caution on campus at night to ensure her safety, other students say they aren’t as worried: “I don’t feel unsafe at all on campus any time of the day. I guess maybe because I’m a guy, but I’m always walking around alone at night and I don’t really think twice about it,” said Joey Baughan, a college sophomore.

Despite Baughan’s feelings of safety, 5.4 percent of men in college experience rape or sexual assault through physical force, violence or incapacitation. No matter your sex, Ali said, this is an imperative time for survivors to come together and speak out.

“If I could give other survivors who are struggling advice, I would say talk to someone,” Ali said. “Let someone know, and maybe they won’t be a huge help to you, but that’s when you move on to the next person until you find someone who is there to listen to what you have to say and help you.”