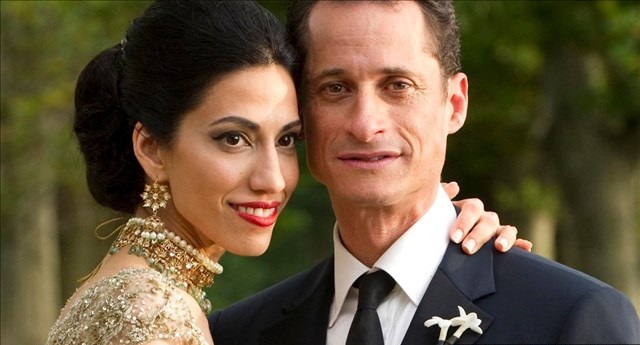 Anthony Weiner was caught in another sexting scandal, this time with a photo of his son sleeping next to him in bed while he had a (fully clothed) erection. His wife Huma Abedin released a statement: they are separating. This is not the first time Weiner’s wife found him dallying in digital trysts.

In 2011, he tweeted a lewd photo he’d intended to privately send to a college student. He claimed his account had been hacked, but later admitted he was engaged in sexual exchanges with at least six women. At the time, Abedin, a senior aide to Hillary Clinton, was five months pregnant. They stayed together.

In 2013, new pictures were leaked to the press while Weiner was running for President. He admitted to sexting three women as “Carlos Danger.” Abedin and Weiner stayed together.

It’s such easy fodder. It’s the kind of news made for late-night monologues, punny New York Post headlines and witty tweets. And Abedin’s decision to leave Weiner may feel like cause for celebration – but I guarantee you, for both Weiner and Abedin, the people behind the scandal, there is no cause for celebration.

This is an incredibly difficult moment for both of them. Abedin has done what she feels is best for herself, her son and her family – as feminists, we should support her, just as we should support any person who has made a decision to take control of a situation and do what is best for themselves.

But we should also remember this is a decision she hoped she would never have to make, and that Abedin and Weiner as well as their son, are all just people. Celebrating publicly that she left her husband isn’t feminist.

Yes – separation and divorce weren’t options for women until 1969, and that option being available for Abedin is a feminist win. Yes – up until very recently women would never have been the aide to the first woman nominee from a major political party in the U.S. – also a huge feminist victory.

Regardless of how the couple feels about all this – and I don’t know them, so I can’t say I know – I doubt this is how they wanted this to happen. Let’s remember that – and keep the conversation respectful.