Donald Trump is a Sexist Jerk, According to the New York Times

This past weekend, the New York Times published an in-depth article about how Donald Trump behaves with women in public and in private. A few quotes from the article:

“‘You like your candy,’ he told an overweight female executive who oversaw the construction of his headquarters in Midtown Manhattan.”

“He kissed me directly on the lips. I thought, ‘Oh my God, gross.’ He was married to Marla Maples at the time. I think there were a few other girls that he kissed on the mouth. I was like ‘Wow, that’s inappropriate.’”

“He was dismissive. It was always, ‘Hon,’ ‘Dear.’ Things he wouldn’t have said to a man. It was designed to make you feel small. And he did that repeatedly.”

“The next day, they took me to the gym, and I’m exposed to 90 media outlets,” said Alicia Machado, former Miss Universe on her first experience trying to lose weight. “Donald Trump was there. I had no idea that would happen. I was about to cry in that moment with all the cameras there. I said, ‘I don’t want to do this, Mr. Trump.’ He said, ‘I don’t care.’”

Donald Trump’s statements about women in public aren’t much better: He says he “cherishes” women, but calls them pigs; insults their appearance; accuses them of being on their period when female journalists ask him tough questions; and says women who have an abortion should be punished.

“My big mistake with Ivana was taking her out of the role of wife and allowing her to run one of my casinos in Atlantic City, then the Plaza Hotel. The problem was, work was all she wanted to talk about.When I got home at night, rather than talking about the softer subjects of life, she wanted to tell me how well the Plaza was doing, or what a great day the casino had. I will never again give a wife responsibility within my business.” – Donald Trump

These are just a few examples to keep in mind this November. 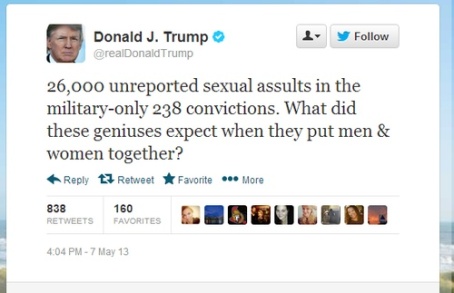