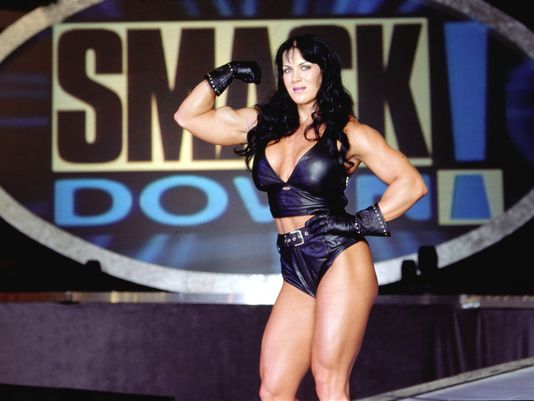 Professional wrestling has, historically, rarely been a women’s business. The few women in the industry have often been hyper-sexualized with the focus given to titillating the male viewers over putting on a good show. But when Chyna, given name Joanie Laurer, debuted at the World Wrestling Federation (now World Wrestling Entertainment) as Hunter Hearst Helmsley’s “bodyguard,” everything changed.

Laurer was a force in women’s wrestling. She quickly broke out of the bodyguard/enforcer role and became a fierce competitor, using her size (5’10” and 180 pounds) and bodybuilder’s physique to lay waste to the women’s division, setting multiple records along the way. 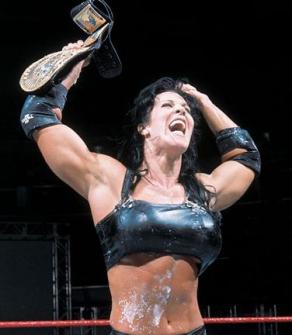 She was the first woman to enter the Royal Rumble, a 30-competitor battle royale designed to determine the number one contender for the World Heavyweight Championship, a title that to date, has only been held by male wrestlers. Laurer entered the match twice, nearly winning her first time – she was the last eliminated wrestler, losing to “Stone Cold” Steve Austin.

Though the Heavyweight Championship continues to be held by male wrestlers, Chyna paved the way for progress – since her two competitions, Beth Phoenix and Kharma have both been entrants as well.

And the records don’t stop there. Chyna is the only female wrestler ever to hold the Intercontinental Title, one tier below the aforementioned World Heavyweight Championship. She emerged as a role model – a badass competitor who didn’t need to fit the mold of what a woman “should” look like or how she “should” perform in the ring. As her entrance music demanded: “Don’t treat me like a woman, don’t treat me like a man. Don’t treat me like you know me, treat me for just who I am.”

Tragically, Chyna’s post-wrestling years saw her chasing demons she was unable to outrun. Battling drug and alcohol addiction for many years caused a rift between herself and her former employer after she made disparaging comments about the WWE and appeared in a pornographic film, which heavily parodied her former employer. While cause of death has yet to be determined, she was found unresponsive in her Redondo Beach, California home on April 20 of this year.

Chyna is one of many wrestlers who completely transformed what the women’s division looks like and how it operates. “Bra and Panties” or “Evening Gown” matches have been replaced with 30-minute marathons that receive more applause than their male-fought counterparts. Women in the business are no longer seen as just hot or sexy—they are fearless, strong and going out of their way to shatter the glass ceiling.

Let’s not mourn Joanie “Chyna” Laurer’s passing, but instead celebrate her as a trailblazer, a woman who defined her own idea of beauty, and a fierce competitor who demanded respect.

One thought on “Chyna – Breaking the WWE Glass Ceiling”