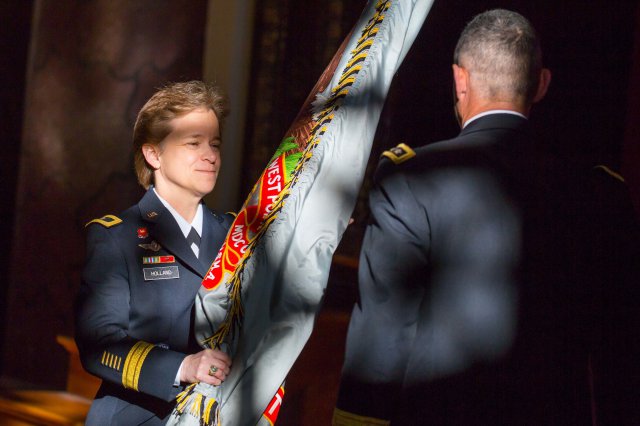 On the heels of the recent decision to open all combat jobs to women, another first was marked in female military history on January 5. Brigadier General Diana Holland was sworn in at the U.S. Military Academy as the first female commandant of cadets.

Holland will be responsible for transitioning more than 4,400 cadets into Army officers at the prestigious West Point academy. It’s a mission, Holland said, she is more than ready for.

“[It’s an] opportunity to work with incredible, talented young men and women such that you find here – they are an inspiration, and serve as a constant reminder that the future of our Army will be in good hands,” said Holland, who graduated from the academy in 1990.

After receiving her commission, Holland served as a company, battalion and brigade commander. Most recently, she served as the first female deputy commanding general of the 10th Mountain Division and Fort Drum. She has been deployed to Iraq twice and Afghanistan three times

West Point Superintendent Lieutenant General Robert Caslen recounted Holland’s service and experience as the ultimate proof that she is more than qualified for her new role.

“[She] has a phenomenal reputation throughout the Army,” Caslen said, adding that she previously taught as a history professor at the academy. “The Corps of Cadets is getting a great commander and an outstanding leader.”

Holland said it was her experience at West Point, learning what it meant to work as a team and to push herself, that prepared her for a successful career in the Army.

“I distinctly remember challenging myself to work harder, to be as fast or as strong or as skilled or as smart as many of you,” Holland said during the ceremony. “But when I wasn’t as strong or skilled or smart, I could always turn to one of you for help or advice. I am grateful to have served with you and most importantly, to be counted as one of you.”

Holland gave a nod to other female alumni who have recently made their own marks on military history, including U.S. Army Rangers Captain Kristen Griest and First Lieutenant Shaye Haver, who completed their training in August 2015.

One thought on “West Point Swears in First Female Commandant”