On a lazy Sunday in 2011, a diverse group convened at my friends’ apartment for a “Star Wars” movie marathon. I arrived toward the end of “A New Hope,” wearing an “Empire Strikes Back” t-shirt I purchased on a whim at H&M. After putting my beer in the fridge, I started meeting some of the new faces in attendance. One guy – let’s call him Brian – shook my hand, and said, in a tone of awe and disbelief, “I’ve never met a girl who liked ‘Star Wars’ before.” It was an innocent comment, but it was so patently ridiculous the room erupted in embarrassed laughter.

Brian had no idea he had inadvertently admitted to holding a narrow and sexist worldview, or that he betrayed a lack of nerd self-awareness. I shrugged and assured him there are lots of women out there who like “Star Wars,” and maybe he just hadn’t met them yet.

In Brian’s defense, the party was mostly made up of men. There were two other women in the room, but they were attending out of grudging obligation as girlfriends of the hosts – another stereotype come to life. I can see how a man, particularly one who doesn’t socialize much with women and who participates in the historically male-dominated fandoms of fantasy and science fiction, could reach the aforementioned conclusion.

Merchandising campaigns and sexist fan behavior help to further enforce Brian’s assumptions – ask any female fan how difficult it can be to find “Star Wars” t-shirts in women’s sizes, or how many times they’ve been asked to dress up like “Slave Leia” in a metal bikini.

Many have been eagerly anticipating the release of the latest installment in the series, “Star Wars Episode VII: The Force Awakens,” in part because the movie offered an opportunity for course-correction. Thirty years after “The Return of the Jedi,” Leia is a respected military general, and a strong, talented scavenger from Jakku named Rey is the movie’s new heroine. 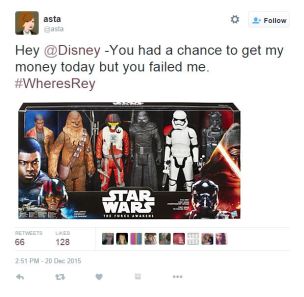 But while “The Force Awakens” succeeded in introducing great female characters into a series which was sorely lacking them, the tie-in merchandise doesn’t reflect much progress. In the weeks leading up to and following the movie’s release in December 2015, the hashtag #WheresRey began to trend on Twitter and Facebook, reflecting fans’ disappointment that the series’ new heroine was hard to find among toys, costumes and collectibles.

But on the other end of the spectrum, a vocal contingent of fans dubbed Rey’s character as unbelievable because she’s too multi-talented. Over the course of the film, she pilots the Millennium Falcon, makes mechanical repairs, holds her own in duels with male opponents, performs “Jedi mind-tricks” on a Stormtrooper and uncovers Luke Skywalker’s long-lost lightsaber.

Yet, all these abilities are easily justified: Rey is a skilled pilot and mechanic because she harvests parts from abandoned ships on Jakku; She lives alone in a violent society, so it’s understandable she would know basic combat principles; Her ability to use the Force is not unprecedented, especially when her adversary, Kylo Ren, seems to impart critical information to her when he attempts to extract her memories.

It’s worth noting that these were not criticisms made of Luke Skywalker, another wunderkind from the “Star Wars” universe, or of other preternaturally skilled movie protagonists like James Bond.

The filmmakers have already done the heavy lifting necessary to make “Star Wars” a more welcoming universe for women by introducing compelling female characters. Now it’s up to the fan community to demand better of the merchandising department, and better of each other.

Female sci-fi fans are more visible than ever. Just take a look at any crowd photo from San Diego Comic-Con or a picture of fans waiting in line for the premiere of “The Force Awakens.” It’s clear demographics have shifted. Hopefully, a new generation of fans raised on Rey, General Leia Organa and Captain Phasma will reshape the popular image of a female “Star Wars” fan, and guys like Brian will no longer assume we don’t exist.

adventure, alternatives, bank, feminism, news, self, think, worth the cash, you're fabulous!