A year ago I moved to Baltimore and laid myself on the shrine of internet dating. Starting off in a new city, I had a list of self-improvement goals and things I wanted to learn about. On top of many of my lists was to have a healthy love life. I was hoping I could swipe my way right to a happy ending.

It resulted in run-ins with almost serial killers, many ignored text messages, painful first dates and at least one spectacular night of throwing up in a trashcan as my mascara streamed down my face. It’s debatable if my internet dating was good for my wallet or my liver, but I discovered a very unexpected benefit: the worse my dating adventures got, the more I felt a sense of comradery with my female friends.

Every week I’d get together with friends and we would review our misadventures while imbibing various alcoholic beverages. We found different drinks to suit our different levels of heartache, and overtime this ritual became empowering.

I realized there were many things out of my control, such as finding the “perfect match,” but as long as I had friends who could help me laugh, I found I could not only “get over” my heartaches, I could become a better person because of them. In the spirit of girl power, female solidarity and just having a good laugh at my expense, I invite you to pour a glass of wine and join me as I revisit some of my best (worst) modern dating moments.

If you are feeling extra fun, try the suggested drink for each situation!

“Don’t I know you from my addiction recovery group.”

This is perhaps the worst opening line in a message I have ever seen.  Do I look like a drug addict? Oh also you’re drug addict? I responded, “Absolutely no you don’t and aren’t you not supposed to out people from those groups? Not that I would know because I have never been to one…” Suggested Drink: Liquid Cocaine (in the spirit of drug themed alcohol)

“I wrote this song for my dog.”

A guy who had neck muscles that looked like they wanted to whisper something into his ears said this to me immediately before he pulled out a guitar and started singing a ballad for an uncomfortably long time while gazing lovingly into the eyes of his dog. Somehow this guy still managed to convince me to stay the night at his house. The best thing that came out of this was the journal entry I wrote the next day about how weird his penis was. Suggested Drink: Shotgun a Pabst Blue Ribbon or Bud Light 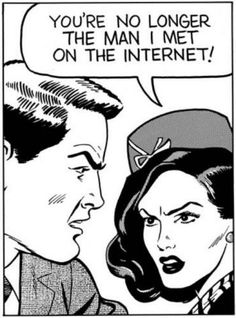 “I feel like you should know I got tested for HIV earlier today.”

This was said to me between breaths as he was going down on me. You may think this one is a no-brainer for the “Get the Fuck Out” category, but instead we had sex on-and-off for a couple months and he is now one of my best friends. And in case you were wondering: no, neither of us have HIV. Getting tested is sexy! Suggested Drink: Merlot  in honor of classy, adult life decisions

“You are really beautiful but you’re probably a bitch and don’t talk to nice guys like me. Sorry for wasting your time princess.”

Could you seriously have a more misogynistic asshole “nice guy” complex? This message was sent to me by the same guy on three different dating websites a few months apart; clearly a copy and past prodigy. I responded to approximately zero of his messages. I have frequently found the “nice guys” of the internet dating world to be the most self-entitled jerks. I don’t owe you sex because you bought me dinner, and just because you’re nice doesn’t mean I’m going to be throwing my underwear across the room. Suggested Drink: A Blowjob shot because this guy will never get one.

“Damn girl you got some fat ass legs.”

Honestly, this line did not come from an internet date. Instead it was bestowed on me by a security guard at the United States Postal Museum. He then hounded me for 30 minutes trying to get my number, switching back-and-forth between charming and scary. Finally, I decided to give him a fake number and halfway through writing the number down, I realized I had started to write my real number. I quickly changed the last number, thinking there would be no way he was crazy enough to try a million variants of it. He was. The many angry voicemails he left me haunt my nightmares. Suggested Drink: An entire bag of Franzia

“I don’t know, I’m not into bi girls. Can you like prove that you’re not going to leave me for a guy?”

How exactly am I going to prove I am not “going to leave you for a guy”? Is there some blood test I can take or a sacred lesbian rite that I can perform? How about a polygraph? This line is fairly typical of my bisexual experience. The best part about this particular girl is after she finally concluded I wasn’t gay enough to date, I ran into her at a bar a month later… making out with a guy. Suggested Drink: Whiskey on the rocks 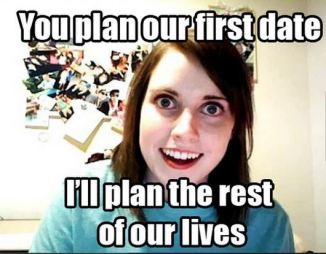 “How can you expect to be my girlfriend if you’re afraid to be alone with me?”

He said that on a first date so, serial killer? Yeah, serial killer. Pretty much every moment I spent with this guy convinced me I should definitely not be alone with him. He is the reason my driver’s window doesn’t roll down anymore. Rather than be alone with him in my car with the doors closed, I insisted on keeping the door open during a thunderstorm and it shorted out my window control panel. Still worth avoiding being murdered in my own car. Suggested Drink: A Screwdriver to match the one you keep under your pillow

“It’s ok that we haven’t met face to face yet. Bring your heated blanket over and we can get snowed in together.”

This line came via OKCupid from a guy I encountered on Tinder three months before and rejected. While meeting face-to-face for the first time with the sole intent of using a heated blanket might sound pretty smutty, I found it charming. I rejected the blanket meetup, mostly due to my actual interest in having more than sex with him and we opted to meet up at a bar later in the week. We’ve been together ever since and are now that disgusting couple in an open relationship that refers to each other as “partners.” I know, I’m sorry too. #loveatfirstswipe Suggested Drink: An Irish Coffee

“You said you lived in X neighborhood, right? I might be outside of your house. You should come outside and meet me. It will be so romantic.”

Context: It was 3 a.m. I had exchanged maybe three messages with this guy two weeks before. I told him the neighborhood I live in in a very casual manner, “Oh yeah I live close to Camden Yards, I love baseball!” He was outside my house. I had never given him my address; it’s not that small of a neighborhood and no it was definitely not romantic. Suggested Drink: Three shots of absolutely anything followed by a restraining order

“You look disappointed. You don’t have to be such a bitch about it. You can just leave if you want.”

I had not been disappointed until he opened his mouth. Fortunately, I was far enough into the online dating world to realize this guy was “negging” me in the hopes that if he damaged my self image enough I would sleep with him. I stayed, ordered an expensive drink on his tab and then when he got up to use the bathroom I grabbed my purse and left. Suggested Drink: An Old Fashioned because dating might not be the same as it was in the old days, but alcohol can be.

Cheers, ladies! Good luck on all of your dating adventures.