Not All Uteruses Who Wander Are Lost

In my social circles, Dr. Sigmund Freud is widely considered to be the cranky old grandpa of psychology.

As a young feminist freshman at Tulane, I often joked about Freud’s penis envy, blaming everything on the mom and the strange diagnosis of hysteria. I remember throwing together a last second “Freudian Slip” costume for Halloween, and convincing a friend who had forgotten to prepare a costume to write “I ❤ My Mom” in sharpie on his shirt and accompany me as an “Oedipus Complex.”

I thought I was clever when I thought to write “sexually aggressive” next to an incredibly poorly-placed sharpied nipple on the fabric over my breasts, using my own anatomy to convey Freud’s laughably incorrect assumptions about female sexuality. I thought it was hilarious- hysterical, even.

I had recently lost my therapeutic trust in Tulane’s counseling center where I had been treated (like crap) for sexual-abuse-related PTSD. So I talked a lot about my distrust of psychiatrists. If they weren’t going to treat me like a person with dignity, I wasn’t going to spend time with them, plain and simple.

That was before I eventually transferred schools and added a psychology concentration to my major. It was also before I knew that I actually suffer from hysteria.

It didn’t take long after my Freudian Slip Halloween for my hysteria to catch up with me.

About two months later, I noticed a worsening pain in my left leg. Some doctors thought I had a blood clot, others thought I had tendonitis from overexerting myself at marching band practices. After months of MRIs and pain even heavy narcotics couldn’t touch, I was diagnosed with sciatica, but my doctors didn’t quite know why an otherwise healthy teenager would have a health problem associated with aging.

At this point, I had already developed a variety of nervous system problems. I was having trouble with my memory, fainting in enclosed spaces and having brief spells of unresponsiveness- I could hear what was said, but could not talk or move. 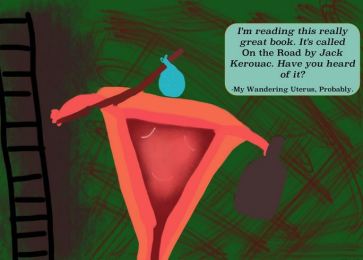 I was literally a nervous wreck.

My symptoms continued to worsen until I lost complete control of my motor functions, and after a few bedwetting incidents (which was not embarrassing as a 19-year-old girl in a college dorm AT ALL), had what looked like a grand mal seizure. I had another one the next day, and then more and more as each day went on. My numerous ER visits were always laughably unhelpful – I felt like they would look at my chart, make me hang out for four hours without food or water just to send me home with no answers. At one point, the doctor at our Student Health Services accused me of “faking” my seizures for my mother’s attention.

It wasn’t until I moved to Massachusetts that a doctor listened to my story and understood I wasn’t faking my seizures, even if they didn’t show up on the EEG.

I just have hysteria.

For millennia, the treatment of hysteria involved inducing a “paroxysm,” an event that most of us these days would call an “orgasm.” That’s why vibrators were widely used as a treatment for hysteria, especially for well-to-do women with financial resources. Sadly, my well-stocked arsenal of *ahem* “medical devices” has not yet cured my hysteria.

If we asked Sigmund Freud why my vibrators have not yet cured my hysteria, he may say it’s likely because my hysteria does not stem from my uterus, as the name suggests, but from emotional problems from my brain.

Because I have PTSD from sexual abuse, most of my doctors have blamed my strange neurological symptoms on my brain’s inability to get past my sexual trauma history. In fact, the majority of people with my brand of modern-day hysteria are women, and the majority of us have PTSD. So if you are up on public health statistics, you can imagine that I am not the only person with hysteria who survived sexual abuse.

Of course, we don’t actually diagnose people with “modern-day hysteria,” at least not in those terms. Instead, we call my condition any host of names including Conversion Disorder, Somatoform Disorder or Functional Neurological Disorder. My seizure symptom specifically has undergone a number of name changes, from hysterical seizure to pseudoseizure, but these days it’s most often called “Psychogenic Non-Epileptic Seizure” or “Non-Epileptic Attack Disorder.” This disorder is characterized by “paroxysmal events,” but unlike hysteria of the past, “paroxysmal” in this context means “sudden attacks,” not “orgasmic.”

Like hysteria, Conversion Disorder is diagnosed when patients present with very real symptoms outside of the patient’s control without a clear organic origin. These symptoms often have something to do with how the nervous system functions, so the psychiatry department sends us to neurology, but the neurology department can’t figure us out and because we almost always have some concurrent mental health problems, we get bounced back to psychiatry.

It’s very hard to get real treatment when you have a disorder no one wants to own.

It’s also very hard to trust anyone – especially yourself. Not really knowing if you have mental health problems because your body is physically sick or you have physical sickness because you have underlying mental illness doesn’t help to handle the situation. You feel like you’re the only one who has this, which makes you feel crazy, which makes you not trust yourself, which makes you act strange. The more doctors tell you you’re crazy, the more you start to believe it.

And then one day you stop trusting your own reaction to your body, and then it takes you years to get the most basic, clear-cut health problems under control.

Which makes that hysteria diagnosis start to seem all the more fitting.

Something happened to me a few months ago. I went out drinking with some of my coworkers, and ended up feeling really sick the next day – nausea, GI issues, headaches, what felt like bruises all over my body as well as foot and joint pain. It’s not super unusual to feel like crap after being out drinking with your coworkers, so I didn’t worry at first.

But despite all of my hangover tricks, this one didn’t go away.

After a few weeks, I went to the doctor. My labs came back with indicators for chronic inflammation, but after ruling out what they could, my doctors diagnosed me with fibromyalgia and Reynaud’s Syndrome – another pair of those “we don’t know exactly where it comes from, but it seems to be linked to stress” diseases that seem to affect mostly women.

My very patient physical therapist and I worked through my pressure points, and found that a lot of my symptoms seemed to be linked to my pelvic region and lower back. It also seemed to get worse around once a month.

One day, it clicked.

For almost 10 years, I have been suspected of having endometriosis, a condition where tissue resembling the lining of the uterus grows in places that aren’t the uterus – like nearby friends “the ovaries” or “the bladder” or “the long intestine.” This becomes a larger issue when one gets their period as there’s no vagina for this fluid to leave the body, putting fluid where it shouldn’t be. In fact, a few weeks before the hangover that never went away, I had an IUD placed to keep my likely endometriosis at bay. While it stopped my periods on the outside, it likely did not stop my periods on the inside.

Yes, it’s just as painful as it sounds.

Sure enough, my OBGYN agreed that endometriosis was a likely culprit of some of my other symptoms.She referred me to consult with a gynecological surgeon, who stimulated various pressure points in my vagina to determine exactly where the pain was internally.

This more-intimate-than-most-pelvic-exams visit did not cause any “paroxysms,” but I did yell out in pain a few times! He then came up with a treatment plan that involves a surgery and special pelvic floor therapy.

The surgeon and I had a long discussion about my medical journey. While he acknowledged that there is a psychological component to fibromyalgia, he reminded me that having the lining of one’s uterus grow on organs that aren’t one’s uterus and having periods internally is very painful and stressful itself, which can always make one’s mental health symptoms worse.

This was not a new concept to me. My therapist and I have long floated the idea that my physical symptoms cause me constant underlying stress, making it hard for me to handle “normal” stressful events, causing my brain to have these big panic attacks that look more like seizures.

I had the surgery earlier this month and sure enough, my surgeon found endometriosis. It’s still too early to know for sure if the surgery worked completely, but my family and friends have expressed to me that I seem to have more energy. I told my doctors that I am having trouble complying with my rest instructions because I feel the best that I have in years. I haven’t had my first pelvic floor appointment yet, but I’ll let you know if this process involves Freud-prescribed sex toys.

Oh. And I haven’t had a seizure in over a month, too.

So, the root of all of my “psychosomatic” health problems may actually be that my uterine lining has a bit of a wandering problem.

Freud was wrong, and that is hysterical to me.

One thought on “Not All Uteruses Who Wander Are Lost”